Addiction comes in every shape, sex, color, and size. It affects every economic class and neighborhood and touches one in seven families across North America. We tend to believe addiction is about drug and alcohol abuse, and it is, to an extent. But drugs and alcohol are only a small part of the problem. The most challenging part of this disease is the way people think, feel, and behave.

It’s easy to believe the addict is the sick one and the one who needs to make all the changes. But that’s not true, either.

Addiction is a family illness. Like an iceberg, what you see sticking out of the water is the smallest part, or the fifteen percent.

With the addicted person, the 15% is their relationship with drugs or alcohol.

With the family member, the 15% is their relationship with the addict.

The other eighty-five percent of this illness is the unhealthy behaviors and characteristics that both the addicted person and their family will exhibit.

Both parties will become defensive when confronted with their unhealthy behavior. The addicted person will yell, swear, blame you or others, and may act aggressively to get you off their back. The family members may exibt the same behavior when confronted on enabling or when confronting the addict.

Both parties will make excuses for the way they behave. The addict says, “I deserve to drink, I had a stressful day at work.” The family says, “I wouldn’t be yelling if you didn’t make me so mad.”

Both parties keep secrets. Addicts don’t just hide their drinking or drugging. They also hide their thoughts, feelings, and the things they do. The enabler masks their feelings and protects the addicted person’s secrets while isolating from the rest of their family.

Both parties are ruled by dishonest thinking. Addicts minimize their usage by saying things like, ‘it isn’t hurting anyone else, or at least I’m not using heroin.” The family attempts to set limits but doesn’t follow through. They minimize enabling behaviors by saying things like, “this is the last time I’m giving you money,” and then, when they give it again, they justify by saying, “it was only for food or gas, or I couldn’t put them out on the street.”

Both parties make themselves sick by looking for answers outside of themselves. The addict seeks relief in substance. The enabler seeks relief from uncomfortable emotions through enabling behaviors.

Both parties withdraw from friends and family. Struggling with addiction is exhausting for everyone involved and becomes too tiring to keep up the pretense. Seclusion is sought, and social gatherings are avoided.

Both parties feel miserable and hopeless. It seems like things will never get better. Activities that used to bring pleasure, no longer do. Days become something to get through rather than to be enjoyed.

Both parties struggle with depression and anxiety. Neither can remember the last time they felt good. The addict uses more drugs to counteract this effect. The enabler may use food, sleep, or even indulge in substance themselves.

Addiction affects everyone in the family. Although there is no one size fits all, there are tried and true approaches. It’s important to step outside your home and seek help. No one chooses to be an addict, and no family member consciously decides to get sick.

Although the facts may seem grim, there is hope.

It’s essential to understand and accept families can become equally as sick as the chemically dependent person. When the addicted person is treated and then put back into a toxic family system, the chances of a successful recovery are reduced. However, when the family is prepared to learn and engages in their own recovery process, healing can and does occur. 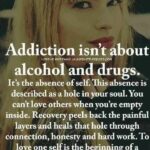 The Real Reasons You're Not Getting Clean And Sober Previous
Watching Your Child Struggle With Addiction Is Painful,... Next 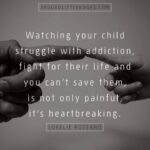