Life doesn’t always go as planned. You stumble, you fall, and for the most part, you pick yourself up and learn from your mistakes.

Every experience we go through is meant to teach us something.

But what happens when instead of learning from our mistakes, we keep repeating them?

For people struggling with substance use disorder, and codependency, this is called progression. Progression means thinking and behavior become dishonest as maladaptive coping techniques replace healthy ones.

Addiction affects everyone involved, especially the family. It’s incredibly stressful and can persist for years. The long-term dysfunction and chaos make it hard for families to communicate clearly and openly. To keep the peace, families learn to hide their emotions until they can’t. Then they erupt, creating more chaos, pain, and feelings of guilt.

When addicted persons want their next fix, they can be aggressive, manipulative, and needy. Parents may tolerate intolerable behavior and give in to unreasonable demands. Some parents struggle to see the addicted adult in front of them. Instead, seeing the child they once were.

Parents of addicted adult children may view them as incompetent and unable to look after themselves. It’s this misguided thought process that allows denial to exist and enabling to occur.

Enabling happens when another person, often a well-meaning family member, helps the addicted person avoid the natural consequences of his or her actions.

Addicted persons spend all their money maintaining their habit. Parents enable this behavior by paying their child’s rent, gas, car payments, cell phone bills, lawyer bills, food, and spending money. This allows the addicted person to focus solely on their addiction and continue in their downward death spiral.

Protecting one from the consequences of their actions is never helpful. It’s disabling, and when addiction is involved, it’s deadly.

Imagine a new mother. For the first few months, she will carry her baby everywhere she goes. Now imagine if she never put her baby down? The child would never learn to crawl or to walk. It sounds ridiculous, but with addiction in the family, it can be like that.

I worked with a 70-year-old mom whose 45-year-old son was living rent-free in her basement. She cooked his meals, did his laundry, and cleaned his room. Her retirement savings were almost gone. She reached out to me because she was feeling anxious and needed help. She couldn’t afford to keep providing for her son but didn’t want to upset him by asking him to pitch in. This lovely woman still saw her grey-haired son as an unruly teenager.

She wasn’t far off, either. Although her son had grey hair, he was a 14-year-old child emotionally. He was also 14-years-old when he first started smoking marijuana to cope with his feelings. Instead of working through difficulties, he avoided them by numbing himself with drugs. This resulted in his emotional arrest. Fast forward, and he can’t hold a job. He angers quickly and doesn’t like working. He’s used to everything being provided for him and Mom fixing all his problems, and he wants to keep it that way.

His mom’s love has become fear and her help, control. She feels by doing everything for him, she is keeping him safe.

Her son is stuck in a role in which he feels inept, incapable, disempowered, dependent, entitled, and useless.

Mother and son are in survival mode. They’re doing the best they can with what they know. Without help, their pathological relationship will continue to deteriorate.

Addiction is a progressive, sometimes terminal, illness. Families’ worst fear – death by overdose – can and does occur. To make matters worse, doing the right thing for your addicted loved one is painful. Addicted persons won’t thank you for not enabling them. Instead, they might resort to emotional blackmail. You might hear: “You don’t love me! You’re the worst parent ever! I’m never talking to you again! Thanks to you I’ll be living on the streets! If I die, it’s your fault!”

Without constant support, feelings of anxiety, fear, and guilt can outweigh common sense and logic. Saying no and setting boundaries is difficult. Painful emotions can lead families back into enabling.

Letting go isn’t easy. You may feel it’s disloyal and uncaring, but letting go just means you’re allowing the consequences to belong to the person who created them. When the consequences are more significant than the rewards one gets from using, recovery happens.

By reaching out and starting your own recovery process, you cut the ties binding you to your addicted loved one’s behavior. Inner peace begins when you stop letting someone else control your destiny and start taking responsibility for your health and happiness. 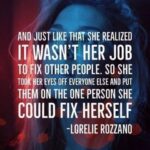 Who's Protecting You From You? Previous
Help! My Parents Won't Stop Enabling My Brother. Next 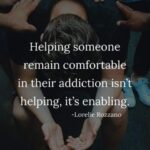 Addiction Is Less About Drugs Or Alcohol And More About This.

To The Family Living With Addiction, I See You.